Welcome to your new obsession: trying to figure out the myriad things you can use to make compound butter.

We hope you came off your January detox as quickly as we did because we’ve got one more delicious ditty to add to the seemingly infinite lists of food trends for the year: compound butter. Yes folks, it is possible to actually make butter more delicious and it simply entails mixing things in with it. To absolutely no one’s surprise we chose bacon as our gateway compound. But wait, there’s more! We also caramelized some leeks to give it a sweet and slightly vegetal backbone. You can use this to make any dish more interesting (potatoes, roasted veggies and pasta come to mind) but we’re betting you’ll do what we did and just end up eating most of it on fresh bread. Resolutions be damned. 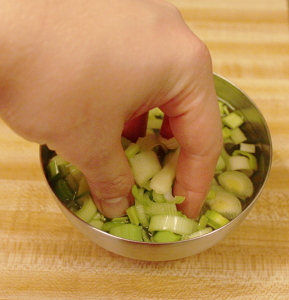 Leeks have a knack for getting dirt in them so you may need to rinse twice.

Chop the bacon into tiny pieces so it mixes, spreads and is easier to eat.

Hold the ends of the paper and roll down to meld the butter together.

3 responses to “Leek and Bacon Butter”