In short, we are the greatest amateur chefs ever to grace a cramped New York City kitchen. 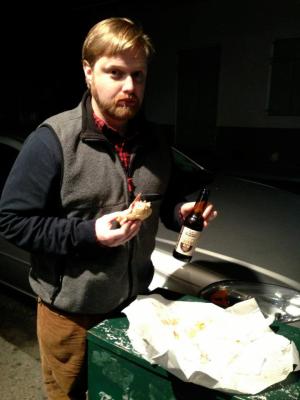 Jake’s day job is  as a strategy director at a digital advertising firm in Manhattan. Ever wishing that his agency experiences were more like Mad Men and less like Office Space, he spends his spare time thinking up new recipes and perfecting his knife work skills. Jake’s communications background is reflected in the messages of tastiness borne out by his modern takes on comfort food favorites, which often leave his guests speaking in tongues. If you smell maple syrup and hot sauce it’s a good bet he’s in the kitchen.

Thomas Brown (aka, T-Bone)
Sign: Leo
Favorite Ingredient: Garlic
Favorite Drink: Pale Ale
Hates: Cauliflower, Watermelon
If I were on death row, my last meal would be: A buffalo chicken wrap with french fries and a Budweiser

Thomas is a landscape architect working in a “temporary” trailer from the 1964 World’s Fair in the bucolic Flushing Meadows in Queens, NY. When he’s not avoiding flooding and killer mold in his quest to bring trees and green space to the good people of New York, he can be found imbibing, cooking and eating—in that order. Thomas’ past as a polo phenom is readily apparent in the kitchen as he composes powerful dishes at a frenzied pace, using liberal amounts of garlic, blue cheese and caramelized vegetables wherever he can.

9 responses to “Your Teachers”